A little bit of background about who we are. What we do you can probably deduce from the portfolio.

When was the company formed?
Kimmerston Design was established in September 1995, originally in Morpeth, Northumberland, by designer Dave Grey with the aim of providing a cost-effective alternative to the larger regional agencies, and to offer a more personal, professional and creative design-to-print service by blending traditional design skills with the latest digital technology. After three years the business outgrew the Morpeth home so returned to Dave's home town North Shields in 1998, bringing it closer to the majority of our Tyneside based customers.

After operating as a successful limited company from 2003 to 2016, the business has now returned to its original sole trader status and remains in the capable hands of founder Dave Grey and company secretary Kris Grey.

What do we do?
We help other people build their brands and present a professional face to their customers. We do this by offering a bespoke design to print service specialising in below-the-line projects, from leaflets and posters to brochures and annual reports. We have carved a particular market niche with newsletters. We treat each job as an individual project from first visual to final delivery. While happy and able to produce occasional advertisements for our regular clients, we have no desire to be a 'full service' agency or media buyers. We know what we do best and we do it well.

Who's in charge?
Dave Grey, studied Fine Art (drawing, painting & sculpture) and Applied Design (technical graphics, natural history illustration & model-making) in Sunderland from 1977 to 1981. After qualifying he worked originally as a cartographer and graphic designer in the public sector and also freelanced as a graphic designer, artist and model maker. He was elected to the Chartered Society Designers in 1987. He moved into the advertising business as a designer and soon progressed to studio manager. Extensive studio experience, and further in-post technical and management training equipped him to branch out on his own in 1995. Since then the company has constantly upgraded and developed to increase its output and improve its service. Dave also has a first class honours degree in Creative Practice : Design from Newcastle College, graduating in the class of 2011. Kris Grey is an English Literature graduate who has extensive experience in writing, facilitating, event organisation, public relations and communications having previously worked for Procter & Gamble, Northern Arts, the Northern Development Company (NDC, later One North East), Gateshead Council press & PR team, the North East Ambulance Service and NHS Direct. Kris runs her own consultancy as K Communications.

Who else is there?
In addition to the modest, multi-talented in-house team, Kimmerston Design has strong links with many other agencies, repro bureaux, printers, photographers, copywriters and freelance designers based primarily in North East England. We utilise this network to ensure the best results and the best value for our customers. If we can't do it for you ourselves, we'll probably know someone who can...

What about big names and blue chips?
We can't say too much about it, but we do occasionally take on overspill work from other leading design companies and advertising agencies when they have a particularly heavy workload or a flu epidemic in the studio. Some of the region's top agencies know they can rely on a fast professional turnaround in times of desperate need. This way we also get to work on national and international accounts outside our normal remit. Win Win!

Who are our customers?
We produce work for a wide variety of clients ranging from individuals and small businesses to large firms and public bodies. We count local authorities and health authorities, universities and charities, plus service, manufacturing, telecommunications and engineering companies, retailers and sports clubs among our customers. We aim to offer the same individual attention to detail no matter what size the project or the organisation. 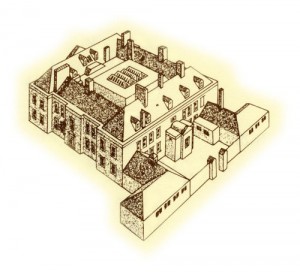 Did you know?
Some of Dave Grey's very early model work can still be found around the region... For example:

At Hexham Middle March Centre/Border History Museum there is a large scale cutaway model of a fortified bastle house.

For many years Wallsend's Segedunum Roman Fort Museum was home to our model of an 18th century coal drop and spout based on a contemporary watercolour by T.H. Hair.

More recently, we built a 1:120 scale model of Harbottle Castle in Northumberland for the Friends of Harbottle Castle heritage group to help educate local school children and visitors to the site by showing how the castle may have looked in its heyday around the year 1500.

And if you want a limited edition, 144th scale cardboard cut-out model kit of Wallington Hall, just send a cheque for £16.99 (includes P&P) to Kimmerston Design.

What's in a name?
Naming your company, like naming your baby or your first college rock band, is always a tough decision. 'Kimmerston' is a farm and collection of small cottages in the wilds of North Northumberland. It forms a part of the Ford and Etal estate near Wooler. Until the late 1960s Dave's great uncle was a shepherd on the Ford estate and lived in one of the cottages. The very young Dave spent many happy holidays and formative weekends playing in the fields around the cottage.

Later, while at college, he was commissioned to produce some card cut-out models of Northumbrian vernacular buildings, including bastles, pele towers, and even the National Trust-owned Wallington Hall. The models needed a brand name, so Kimmerston Design was born. When he formed the present company in 1995 it seemed natural to stick with the name he'd already been using since 1980 ...and surely no-one else would want kimmerston.co.uk for a domain name.

But as it happens...
The farm at Kimmerston runs a successful riding stable and, sure enough, can be found at www.kimmerston.com

There is no connection between the two businesses other than a love and respect for the county of Northumberland, but if you fancy a great horseback experience amid some beautiful countryside, just give us a mention when you book...